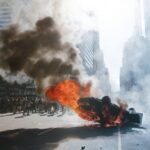 Association spokeswoman Betsy Brantner Smith said in an interview that Congress should hear testimonials from thousands of officers who were injured during demonstrations, riots, arson, and other violence last year following the death of George Floyd.

During the first hearing for the House select committee on the Jan. 6 breach, four police officers offered testimony saying that individuals who entered the Capitol made specific threats against them.

“People need to see that police officers go through horrible things, and Jan. 6 was a horrible thing for some of those officers,” Smith told Fox News. “But, quite frankly, I find this whole Jan. 6 Commission, frankly, a dog and pony show. It doesn’t tell the whole story.”

Later, Smith questioned why the federal government hasn’t provided more information about the shooting death of Ashli Babbitt, one of several Trump supporters who died during the incident, or raised questions about video footage of Capitol Police officers’ interactions with demonstrators on Jan. 6.

On July 27, one of the testifying officers, Daniel Hodges, said he was kicked in the chest and struck with something heavy in the head as other officers and he clashed with a crowd near the Capitol.

But Smith suggested that the injuries those officers suffered likely paled in comparison to the numerous officers who were injured during riots last year.

“We have a Las Vegas police officer who is still paralyzed from the Black Lives Matter riots,” she told Fox. “We have thousands of police officers around the country who are retiring because of post-traumatic stress because of the riots.

A recent analysis from The Epoch Times in late June showed that major metropolitan police departments are struggling with hiring new recruits and dealing with an increase in retirements or officers quitting amid anti-police rhetoric and activism. Violent crime such as murders, rapes, and robberies has also spiked in most major cities.

Last month, the Portland Police Bureau’s riot squad quit en masse after one of its officers was indicted on an assault charge. The arrest stemmed from violent demonstrations that roiled the Oregon city last year.

“It’s heartbreaking,” Smith said. “I have some cops who would rather go back to Iraq than continue to work on the street, just because of the massive amounts of blood and bodies and everything they deal with that people don’t see.”

The office of Rep. Bennie Thompson (D-Miss.), head of the select committee, didn’t respond to a request for comment by press time. Throughout 2020, there was a collective shrugging of shoulders among the political left, as cities were being burned, destroyed, and looted by rioters. There were also many Democrats who went as far as celebrating those causing the destruction and echoing their calls to defund the police.

They later found out that this position was not as popular as they had hoped and the effort was changed. Now the goal was to take the attention away from BLM, Antifa, and other radical leftist organizations, and place the lawless label onto conservatives.

There was never a threat of violence or lawlessness last year at Trump MAGA rallies across the country, but it seems the left conveniently ignores the mayhem of Biden Harris voters looting and burning private and public buildings in Washington, D.C., and in many other U.S. cities throughout the summer!

Dozens were killed, hundreds of police officers injured, and about $2 billion dollars of property damage was done. Attacks on federal buildings in Portland cost $2.3 million. And the Democrat media described the chaos as “mostly peaceful protests.” And yet, they harshly criticized President Trump at the time for deploying federal agents to reinforce outnumbered police forces in D.C.

In an op-ed last week, Family Research Council’s Tony Perkins, whose office is near the Capitol building, reminded people about the rioters in D.C. who lit fires and taunted police officers every night leading to orchestrated violence. The left also ignores the mob that surrounded and attacked Sen. Rand Paul, his wife, and other Republicans following President Trump’s RNC speech.

Most of us remember property owners responding to rioters smashing windows and looting stores by boarding up doors and windows with plywood and hiring security as many businesses did in cities across the U.S. We also remember the praise from most Democrat leaders for those expressing their frustrations and “exercising their First Amendment Rights.”

Last month, White House Press Secretary Jen Psaki claimed that it was republicans who fueled the calls to defund the police, not democrats.

Investigating January 6th has also become a priority. During the first hearing on Tuesday, a New York Times reporter, Katie Benner, called for Trump supporters to be considered “enemies of the state.”

Meanwhile, a pentagon contractor, recently stated that questioning the motivations of the Marxist organization “Black Lives Matter” and their link to “Anifa” is a red flag for extremism.

This is very reminiscent of Isaiah 5:20, where we read, “Woe unto them that call evil good, and good evil; that put darkness for light, and light for darkness.”

Michele Bachmann who was in Washinton DC on January 6th, in an interview with Jan Markell shortly after the event, explained that the media attempted to make Trump supporters look like “evil” terrorists.

“We’ve seen these same tactics occur in Minneapolis, in Portland. These professional helmets that they wear with gas masks, holding plastic shields, and these Mary Poppins like umbrellas that they use to smash windows and gain entrance. We’ve seen all this before in all of these riots,” she explained. “Now the interesting thing is they wanted to transfer the identity of the terrorists, who’ve had this activity in Minneapolis and Portland, to the identity of trump supporters.”

“That’s a lie,” she asserted. “The Trump supporters are not the angry agitators, that have burned down American cities. And they were not the people who were showing up that day for good purposes who did this.”

“I was there with these people,” Bachmann told the radio listeners. “I don’t for a moment believe that they were the ones that did this. But the left won because in a coup, a lot of things happen, psychological warfare is planned. Really the final event that happened was the identity theft. They stole President Trump’s identity, for who he is, what he’s accomplished, they stole the identity of Trump supporters and the prayer people and the patriots. They made us out to look like we were evil terrorists. None of that is true.”

The Bible speaks of a time in which men of “corrupt minds” would “resist the truth:”

2 Timothy‬ ‭3:1, 8-9‬ ‭KJV‬‬ – “This know also, that in the last days perilous times shall come… Now as Jannes and Jambres withstood Moses, so do these also resist the truth: men of corrupt minds, reprobate concerning the faith. But they shall proceed no further: for their folly shall be manifest unto all men, as theirs also was…”