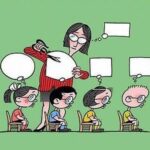 We rightly criticize and condemn China for sending more than one million Uighurs – Muslims – to “re-education” camps. At the “camps” the Uighurs are “educated” in a process their Chinese elders describe as “washing brains, cleansing hearts, strengthening righteousness and eliminating evil.”

Again, this is sick and wrong, a human rights abuse, something that should disgust us all.Recommended VideosUnmuteDuration 0:33/Current

But we have our own, milder, version of “re-education” camps that indoctrinate, all for a supposed good, evolved cause. We call our re-education camps public schools.

Here is one example, from Evanston, right outside of Chicago, of what first and second graders are now “taught” in school:

DEEMAR V. BOARD OF EDUCATION OF THE CITY OF EVANSTON/SKOKIE

This is not a one-off or a rogue teacher. This is the curriculum, endorsed by the superintendent and school board.

Likewise, teachers are forced to acknowledge that “white identity is inherently racist.” They are actually separated by race during training. And if teachers object or question the practice, the district brands them “racists.”

Students are also separated at times by race. During “Black Lives Matter Week,” the science department is required to teach a lesson called, “Black Women and Unapologetically Black.” Fifth grade teachers are even required to indoctrinate – I mean “teach” – that “color blindness helps racism.”

Teachers are instructed “to disrupt the Western nuclear family dynamic as the proper way to have a family” and instead to promote the “Black Village,” which is a “collective village that takes care of each other.”

Again, this is the curriculum for teaching seven year olds. It covers more than 7,000 kindergarteners through eighth graders attending 15 schools.

Amidst all of this, sadly fewer than half of the district’s students meet or exceed the state’s math and English standards. And in the name of “equity,” the district recently eliminated geometry for its advanced students.

This can’t be dismissed as “oh, that’s just wacky Evanston,” or that’s just “cuckoo Berkeley.” This is increasingly the norm across America. If not there already, it may be coming to a school near you.

In short, it is an entire curriculum based on race. The student handbook even prominently states that the district “is committed to focusing on race as one of the first visible indicators of identity.”

In this respect the district arguably promotes the exact opposite teachings of what Dr. Martin Luther King Jr. espoused and demanded: Namely, a colorblind society where his children were “judged on the content of their character, not the color of their skin.”

What Evanston – and schools across the country – are doing is unequivocally misguided. It is dangerous. It is divisive. It hinders, not helps, inclusion, healing, progress, community, and self-worth.

And as we will soon learn, it might be illegal.

In fact, our country fought this battle almost 70 years ago in the courts. It took the famous case of Brown v. Board of Education in 1954 to end our nation’s shameful practice of “separate but equal.” There the Supreme Court ruled that “separate but equal” is “inherently unequal,” thankfully ending the sanctioned practice of government segregation by race.

But now it’s back, just trumpeted as a good, evolving, progressive thing this time.

Though people will equivocate, rationalize, and seek to justify, little commentary is necessary when first graders are taught “whiteness is a bad deal” and separated at times from their black peers based only on their race.

If it’s wrong and bad for the Chinese to “re-educate” Uighurs based on their race or religion – and spoiler alert, it is very wrong and very bad – so too it is wrong to do so with our kids based on their skin color.

The phrase the “road to hell is paved with good intentions” comes to mind.

Imagine if there were schools that openly taught – as part of the approved curriculum – that “Blackness is a bad deal,” separated kids and teachers at times by race, and told the black kids they were bad for being black.

We would rightly be abhorred. It would not be tolerated. Yet today – just flip the labels – it is celebrated and made part of the curriculum.

This is not to say there is no place in our schools to discuss racism and its history. Of course there is, but just the same you don’t remedy one set of wrongs by perpetuating another. As the Supreme Court stated in 2007 when prohibiting public schools from admitting kids based on race: “The way to stop discrimination on the basis of race is to stop discriminating on the basis of race.”

If you think this is wrong, there are two things to do, one political and one legal.

On the political front, you can use the ballot box and elect school board members who reject such practices.

People are finally realizing that what actually affects their daily lives more is not who sits in the oval office in Washington, but the nameless folks who set policy for the schools down the street, where their kids spend more of their waking hours than at home.

And if that fails, people can, and should, consider filing lawsuits. To be sure, it takes courage. Stacy Deemar, a 20 year veteran teacher in Evanston, recently did so.

Like the plaintiffs in Brown v. Board of Education, Deemar is stepping up and saying the Evanston practices violate our Constitution’s requirement of “equal protection” under the law and must stop. Her 34 page complaint boils down to one sentence: “District 65 continues to treat individuals differently based on their race.”

I applaud her. In short, no matter who is doing the “oppressing,” and no matter their motivation, treating people differently based on their race is wrong. Period.

All said, if you want to protest government “re-education” camps, sadly you don’t need to go to China.

PrevPreviousChinese Regime Has Stolen Enough Data To Compile “Dossier” On All Americans: Former Official
Next“Conspiracy Theory” Over Aborted Babies For Organ Harvesting Leads To Be True And Government-FundedNext