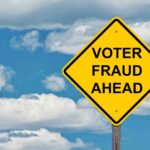 Another blow to the Democrat-Marxists

This poll comes after months of Democrats pushing for unlimited voting access to any jackass who walks into a polling station or drops a stack of ballots into a Zuckerbucks ballot box.

The battles over the 2020 presidential election and subsequent fight between Democrats and Republicans on reforming the system have pushed the issue to the top of those Americans are now worried about.

In the latest Rasmussen Reports survey, 90% said it is “important” to end cheating, long the bane of elections and made a national issue by former President Donald Trump and his loss to President Joe Biden in 2020.

Voters polled, however, do not believe it affected the overall 2020 election, though they are concerned about it intensely, said Rasmussen.

The pollster said that many voters believe the answer is a simple one and one that is called for in many states and GOP proposals:

In early results shared with Secrets, 74% support the photo ID requirement, a blow to liberals fighting it. They called it a “reasonable measure” to prevent cheating.

And while the poll found doubts about the impact of cheating in 2020, it did suggest that voters believe politicians fighting the use of photo ID just want cheating to continue.

Asked if they agree or disagree that “opponents of requiring a photo ID to vote just want to make it easy to cheat in elections,” 60% agreed versus 29% who disagreed.

Clearly, the issue of cheating is a concern of voters in the upcoming election.

But when asked about the last one and whether it is a “dangerous conspiracy theory” to think cheating undermined the 2020 election, 49% agreed and 36% didn’t.

PrevPreviousAn Honest Explanation About Joe Biden Inflation, and It has Nothing to do with COVID
NextMt. Vernon School Board Meeting Dr. Dan Stock – MUST WATCHNext