Oregon Direct Democracy: How it Started in Oregon 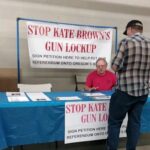 Facing a great deal of corruption in the political system, Oregon passed many reforms.

Editor’s note: This is the first of a multi-part series on direct democracy in Oregon from the Northwest Observer.

In The Oregon System by Allen H. Eaton, the author describes the political possibilities in Oregon:

“Of all the democracies in the world, the state of Oregon is the one in which the people can make or unmake at will any law, constitutional or statutory, elect or recall any official, — in short, do anything in politics which they wish to do, for there is practically no limitation to their political powers.”During the late 19th century, facing a great deal of corruption in the political system, Oregon passed many reforms to its election system. Amazingly, it wasn’t until 1891 that Oregon first passed a law requiring a secret ballot, and almost equally amazingly, Oregon first passed a law requiring a system of voter registration in 1899.

On the heels of these reforms, in 1902 the Oregon Legislature passed and the people approved — by a vote of 91% — amendments to the Oregon Constitution allowing the initiative and referendum process, championed by Populist reformer William U’Ren. The first use of the initiative process was a measure passed in 1904 to create primary elections and end the practice of parties picking nominees through political conventions.

Oregon is one of about half the states that has a robust direct democracy process.

Editor’s note: This is the second of a multi-part series on direct democracy in Oregon

Oregon is one of about half the states that has a robust direct democracy process. In that sense, we are lucky that we can change our Constitution, make and change laws and even veto acts of the Legislature — known as a referendum.

The initiative process is described by the State Initiative and Referendum manual and starts with an idea to create, amend or repeal an Oregon law or provision in the Oregon Constitution. To file, a chief petitioner needs only have the text of the proposed initiative and between one and three chief petitioners. This form is filed with the Secretary of State and, after a cursory review for any legal problems, the petitioners are issued templates for the sponsorship phase.

Any initiative proposed to change the Oregon Constitution has enhanced requirements:

“Templates” refers to electronic forms which, when printed out, become the signature sheets. The “sponsorship phase” refers to the initial period in which the petitioners will gather between 1,000 and 2,000 signatures to get the process started. The reason for this phase is to be able to show that there is sufficient support and energy behind the effort to engage further. During the sponsorship phase, it is required that the text of the measure physically accompany the signature sheets. If there is a small amount of text, the Secretary of State will determine that it can be printed on the backside of the petition. For larger amounts of text, they need to be stapled to each copy.

Once the Secretary of State has validated over 1,000 signatures — they have 10 business days to complete this — they turn the text over to the Attorney General who has five business days to draft and file ballot titles that “impartially summarizes the petition and its major effect.” A ballot title is not just a headline. It contains four parts and the wording is vital to the success or failure of each petition.

At this time any registered voter may submit written comments on the legal sufficiency of the draft ballot title. After the deadline to submit comments, the Secretary of State’s Elections Division will forward any comments received to the Attorney General for consideration when certifying the ballot title. Note that these comments should be on the legality of the process, not the content of the initiative. By submitting comments, gives the commenter standing if the title is appealed to the Oregon Supreme Court — which it often is.

The number of signatures needed is a function of a percent of the vote in the last regular gubernatorial election.

Initiative or Referendum is an important ways to get involved in direct democracy, especially because of supermajorities

Editor’s note: This is the third of a multi-part series on direct democracy in Oregon

The Oregon Secretary of State publishes the rules for Initiatives and Referenda in the State Initiative and Referendum Manual. If you are actively involved in a campaign to gather signatures, it is well worth reading. You might learn something and dispel some myths along the way.

A circulator is an individual who asks voters to sign a petition and signs the petition as a circulator. It’s always a good practice to ask each prospective signer if they are a registered Oregon voter. Most circulators are volunteers and it’s important that they follow the requirements and guidelines for circulating petitions. You may notice that the petition form has a box that says that “Some circulators for this petition are being paid.” If the campaign ever wants to use paid signature gatherers, they have to check that box at the beginning.

While gathering signatures, the circulator must witness each signature collected. That means that they must watch the person sign the petition. It is not sufficient to merely be present in the same room or vicinity. After the sheet is filled or they are done gathering for the time being, they have to complete the circulator certification.

Provide the date when the certification was signed. The date must be provided in month, day, year order — like 08/16/21 — written in all numbers.

It is against the law for circulators to knowingly offer money or anything of value to another person to sign or not sign the petition and they may not write, alter, correct, clarify, or obscure any information about the signers unless the signer initials after the changes are made. At times signers will make a mistake and scribble out the mistake. That’s fine, but they need to put their initials above the scribbling. A circulator may assist a disabled signer who requests assistance in completing their printed name, address and date signed. In such a case, no initials are required.

A signer is a person who is a registered Oregon voter who agrees to sign the petition. The signer must provide an original signature — just as contained in their voter registration record — but is encouraged to provide their printed name, date signed, and address. The printed name, address, etc. is only used for the Secretary of State to validate that the signer is a registered voter. None of this is legally necessary for the signature to count, but obviously it helps. The signer can put their residence address or the mailing address that the county has on file for where to mail a ballot. One common mistake is to have one person fill out the date an address information for themselves and their spouse and then just have the spouse sign.

Each signer must be an active registered voter at the time of signing the petition in the electoral district where the petition is being circulated. Most petitions are statewide, so that requirement is easy.

If the signer has downloaded an electronic eSheet, they must have personally printed a copy of an eSheet or requested a separate person print a copy. Circulators may not use e-sheets to gather signatures. They may only use the 10 line or 5 line signature sheets.

Gathering signatures for and Initiative or Referendum is an important way to get involved in Oregon’s direct democracy, especially when the legislative process is not an option because of supermajorities.