Overturning Election Fraud is the ONLY Agenda Now 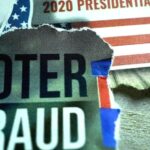 Every true American knows without any doubts that if we fail to overturn the massive election fraud of 2020 and hold everyone responsible for it 100% accountable, the United States of America is FINISHED! Our Constitutional Republic exists no longer! Our Bill of Rights is DEAD! Our Declaration of Independence is CANCELLED!

If you understand even the basic fundamentals of Marxist British Common Law (in control of our courts) known as “precedent and procedure,” aka legislation from the bench, or “case law,” which has been used to undermine and abolish Constitutional Law and all Natural Rights in America for the past two-hundred years – then you understand that if allowed to stand as legitimate, 2020 has set a new “legal precedent” regarding all future elections.

As of today, what happened in 2020 is currently the “new norm” for all future elections. Evil and blatant fraud will prevail every single time good men (and women) do nothing! Evil advances unabated in a vacuum, free from any true opposition or accountability.

The 2020 election fraud is far worse than these things… it amounts to nothing less than the rape, robbery and murder of our entire country and every single American Citizen alive today or born tomorrow, no matter what you might think your politicalleanings are.

Bank robbery is nothing more than an unlawful withdrawal of money that doesn’t belong to the bank robber. Likewise, Biden and Harris occupying the People’s Oval Office is nothing less than an unlawful occupation of the highest political office in our land, by outright theft. It’s the same thing, with far worse consequences than some money missing from a bank…consequences that will soon destroy every American.

As a result, we can toss out every pet agenda item, every Republican side-circus stunt, every wasted penny, and moment on passing new laws or amending old ones while no one in our government has any respect for the law whatsoever.Stop being distracted by fake warriors trying to convince you that they are “fighting for you” by doing everything except the one thing they must do! JUST STOP WASTING PRECIOUS TIME AND RESOURCES ON UTTER NONSENSE!

Every decent honest citizen on earth already knows that the 2020 elections were rotten with democrat controlled fraud involving numerous foreign enemy states and that there is no chance whatsoever, that mental midgets Biden and Harris would have even been elected to run a summer lemonade stand in this country…not legitimately!

Biden is a stumbling, babbling, mindless, racist old pervert who can’t remember who or where he is minute-to-minute — and Harris is a life-long drug addict who slept her way to political power like a cheap hooker. Both have created their entire careers on a foundation of outright lies and nothing else. Not a single decent American would even hire them to babysit their kids, much less babysit the country and free world!

Shortly, massive forensic evidence of that fraud will be made public. But the global Marxist owned media will do everything it can to bury or discredit it. They are already out front spinning lie upon lie about the people involved and the process, which is the most detailed, transparent, and legitimate forensic investigation process into election fraud that the world has ever seen.

This isn’t about Donald J. Trump or his 85million+ supporters. This is about the life or death of the Constitution, Bill of Rights and Declaration of Independence, our Charters of Freedom and Liberty. It’s about our very existence as a free, sovereign nation.

As is always the case in politics, when all the marbles are in play, nothing will be left to chance. Every dirty trick in the book of dirty political tricks will be used, and then some. The Marxist from around the world in current control of the Biden-Harris regime will stop at nothing to maintain the power over Americans that they stole in 2020.

Expect the absolute worst from America’s enemies over the coming days and weeks. They seized complete power in 2020 and they will not let go without a fight. Expect Biden to order American troops and law enforcement against American Citizens on American soil. It’s unlawful, but so is everything else they are doing.

Expect the Marxist courts and news media to use everything they can to derail all efforts to save our country from certain ruin. They are ALL on the other side of this fight, either as a 5th column in our country, or cowards only concerned with protecting their own personal wealth and position.

Expect “fake” criminal charges to drop against the true duly elected President of the United States, Donald J. Trump, on totally trumped-up charges with no foundation or evidence, just like the “fake” impeachment efforts. So long as they can keep Trump under criminal indictment, he won’t be able to retake his proper seat in the White House until he has been acquitted.

Trust me when I tell you, this is why Pence has been openly attacking Trump and backing up the Global Left in power. If the elections are overturned and Trump is under indictment, Pence would most likely be seated at the helm in Trump’s place and Pence is no friend to America. Putting Pence in that office is the same as allowing Biden to remain. Both are controlled by anti-American forces.

For those ready to “just move on…” – if you came to me after your bank account was hacked and drained, what would you expect me to do about it? Tell you that yes, it’s horrible, the hacker is guilty, but it’s over now, it’s done, it’s in the past, so just move on! Does that work for you?

For those who think they can “go along to get along.” – The only way you can ever get along with evil is to become evil, yourself. Are you willing to “go along” that far?

All the marbles are in play…nothing will be left to chance by our enemies. They have us out-positioned, out-financed, out-gunned, at a distinct disadvantage in all areas, including the ability to totally control public sentiments via censored media and social media. Our odds are so bad at this point that they aren’t even worthy of discussion.

So, here’s what is worthy of discussion… There are some fights in life where the odds are meaningless. Whatever you would do to protect your own children, is what you must be prepared to do to protect our entire country, because without that, you cannot protect your children or grandchildren at all.

There are things in this world that are worse than death. Living under our enemies’ boot is one of those things. Biden and Harris have already proven themselves to be mere empty puppets for foreign interests. They have also already proven themselves to be true “fascist dictators” governing by tyrannical orders well beyond the authority of the office they currently occupy.

Nothing else on earth is important at all, unless and until, we succeed in overturning the 2020 fraud, righting the ship, and holding everyone responsible, fully accountable. NOTHING!

NOTHING legislators and tea party talking heads are working on right now is in the least bit important. It’s all shell games to make us think they are fighting for us, while we watch all of them refuse to stand up against the most fraudulent election in world history.

If we fail to overturn 2020 and hold everyone accountable, there is NOTHING ELSE anyone can do that will stop the total collapse of our Republic, nothing! All that will be left to us at that point, is to withdraw from the compact, our Constitution that creates the Federal Government and grants its authority…to return to 50 sovereign independent states that are no longer united and no longer a country.

As of this moment in history, we are existing under an “unconstitutional” government intent upon destroying our country. If you think there is anyone else on earth capable of saving us from them, you’re wrong.

This is the job of American Citizens alone… the job belongs to no one else!

Like it or not, only Trump is in the position to lead this nation out of darkness. He’s the only American who can command more than 85 million patriots right now. We the People, must be willing to follow, to work together towards the most critical common goal in our nation’s history. It’s seventeen-seventy-six again!

PrevPreviousNSA Responds to Tucker Carlson Claim of Surveillance, The Generic and Very Political Non-Denial Should Alarm Everyone
NextFacebook Asks Users to Report Friends for “Extremism”Next